So clear, so obvious

One of the themes that works its way into my novels is a misinterpretation of past events, when viewed from the understanding of the present. Hindsight can cast light on a great many things, but sometimes the light it casts creates wholly deceptive shadows.

One story whose interpretation has always fascinated me begins in 1144, when William, a 12 year old tanner’s apprentice in the city of Norwich, vanished. His mutilated body was eventually found in a wood. For various reasons (Anglo-Saxon v Norman politics, ecclesiastical quests for lucrative relics, sheer malice, overheated imaginations etc) it was concluded that William had been tortured and crucified by the Jews of Norwich. The case was taken up, with relish, by a Norwich monk, Thomas of Monmouth, and expanded into a hugely gothic account, offering dozens of proofs that little William had been ritually sacrificed by the wicked Jews. The Catholic church hesitated over recognising the miracles that followed, so little “Saint” William was never actually officially canonised, but he was recognised as a saint and child martyr in Norwich. 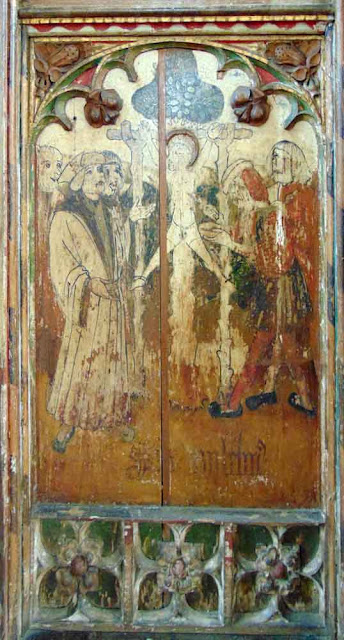 A hundred years later, the murder of little “saint” Hugh of Lincoln was also recognised as an obvious case of Jewish ritual murder, and many of the Jews of Lincoln were promptly rounded up and hanged. The Jews of Norwich were a little luckier. They had forty-five years of freedom after William’s death before the massacres began.
Little Saint Hugh was more famous. He got a mention in Chaucer and a ballard by Steeleye Span.

It’s all a typical story of anti-Semitism in Mediaeval Europe, nasty but predictable. What really fascinates me, though, is the reinterpretation of the story in the latter part of the 20th century. According to Thomas of Monmouth’s colourful account, William’s body was found dressed in jacket and shoes. Just jacket and shoes? It doesn’t say, but historian Vivian Lipman, in 1967, concluded that the body must have been half stripped. Other historians then leapt to a similar conclusion that the murder was actually a sex crime, perpetrated by a child molester. Just as Thomas of Monmouth embellished the story out of all recognition, so modern historians turned supposition into irrefutable fact. The boy was last seen heading off with a stranger, and was later found naked from the waist down with mutilated genitals. I heard one such historian discussing the case on the radio and explaining, with a scornful laugh that ‘of course, it is obvious to us now that it was the work of a sadistic paedophile.’

Yes, it is obvious, in an age where child molesters are the big, nasty bogeymen who terrorise our imaginations, that it must have been a paedophile. But back in the 12th Century, an age of unquestioning religious stupidity and fear of outsiders, it was equally obvious that it must have been Jews performing a human sacrifice. We seek out and surprisingly discover our own invented monsters. The truth is that no one has any idea what really happened to William in 1144. Maybe he was accidentally killed while playing with friends. Maybe he was attacked in the woods by a wild boar. Maybe he was abducted by aliens who performed experiments on him! Take your pick and choose whatever comes closest to your personal nightmare.

Historians in quest of “facts” should be very cautious about jumping to conclusions. Better to leave those to novelists, who are always right, without having a single fact to support them.
Posted by Thorne Moore at 06:15 No comments: